We can end the eviction moratorium without devastating consequences: Nj.com Article 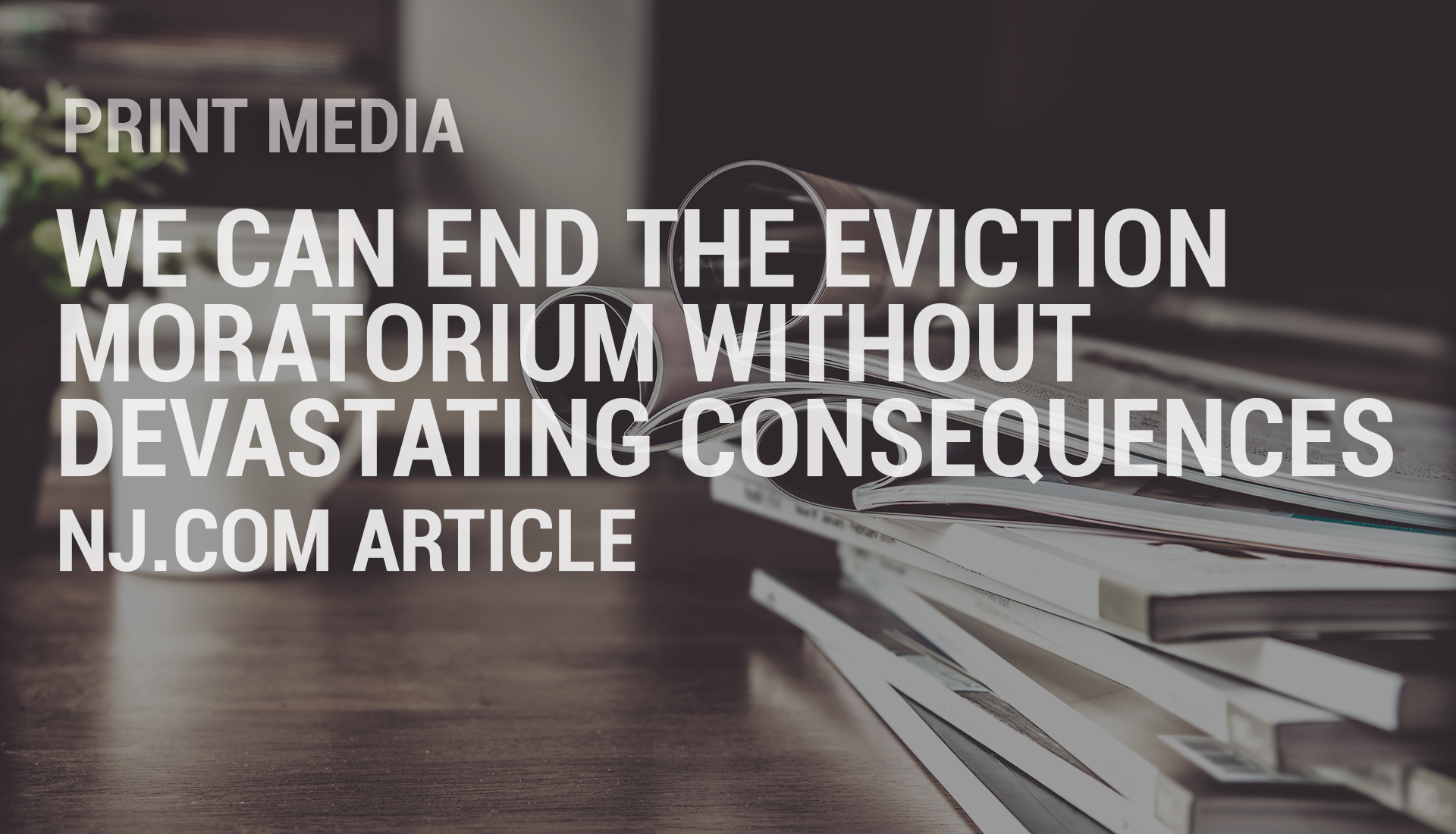 We can end the eviction moratorium without devastating consequences: Nj.com Article

March 31 is scheduled to be the final date of the eviction moratorium.

Not only is the moratorium unconstitutional, but it is also another example of the government putting a Band-aid on a bullet hole, and not planning for any of the consequences. Whenever the moratorium is ultimately lifted, what happens to the reported $1 billion in unpaid rent in New York City alone? What happens to the millions of Americans who owe an average of $6,000 in rent each? Some predict a dramatic number of evictions issued on April 1 and the beginning of a sweeping rise in homelessness.

In an effort to avoid those negative headlines, the Biden administration and Congress alike will push for the moratorium to be extended another three or six months, all while providing additional checks to households with the stimulus bill that was just passed. Extending the moratorium while stimulus checks are being distributed creates more incentives for delinquent payments, less incentive to find alternative accommodations, and more incentives for landlords to increase rents on paying tenants. Corporate landlords will likely begin to price in the uncertainty created by the moratorium, which has rendered their contracts with tenants all but useless. Other landlords will leave the market altogether, reducing the rental housing pool.

Without the same amount of power to raise rents on paying tenants or to just leave the market, are the often ignored mom and pop landlords who are struggling most with the consequences of the eviction moratorium. Many of these landlords use the rental income from their properties to pay their own mortgages. Add to that, they are often personally close to their tenants, complicating these relationships in ways many other landlords don’t experience.

As we begin to close the door on COVID-19’s wrath on our economy and open up again, we are going to see corresponding challenges in our housing market that will have consequences on the economy as a whole. If our lawmakers extend the eviction moratorium yet again, they are simply going to make a bad problem worse.

Extending the eviction moratorium is like robbing Peter to pay Paul, and it is not a solution to the economic crisis many are experiencing. It simply does what politicians love most — push the problem off for someone else to try to solve.

Our lawmakers must do the challenging work they were put in office to do and come up with real solutions for the many who will be living with financial hardships created by a moratorium that was presented as something to save them. That does not mean just stopping the moratorium cold. Unpaid rents are now insurmountable sums for many, making the thought of ever catching up on back-rent impossible. We cannot rip the life vest off and watch people drown. Why not allocate some of the $1.9 trillion stimulus bill to pay off unpaid balances of tenants who would otherwise be evicted?

We must end the moratorium in a smart way: allow for repayment plans, delays in evictions, tax credits for landlords with unpaid rent and a timeline for when we will begin to honor contractual obligations in the rental market again. If we do not, we will be living in the shadow of COVID-19’s destruction for many years to come and see the real-life consequences of fewer housing options in the market, higher rents and higher rates of homelessness.